Cathedrals used to be depositories of some of the finest works of art in the world. Then the pesky Reformation came round and stripped many of them back to the walls. What has filled the place of the original medieval artworks has, over the years, been subject to changing tastes. While the Victorians despised all classical additions, the twentieth century in turn, had a bit of a clear-out of what they found dowdy and gloomy.

So what tat should be chucked out in a fantasy aesthetic Reformation? Let’s dispense with the polite introduction that pretends this is anything other than just a list of things I don’t like, and find out! 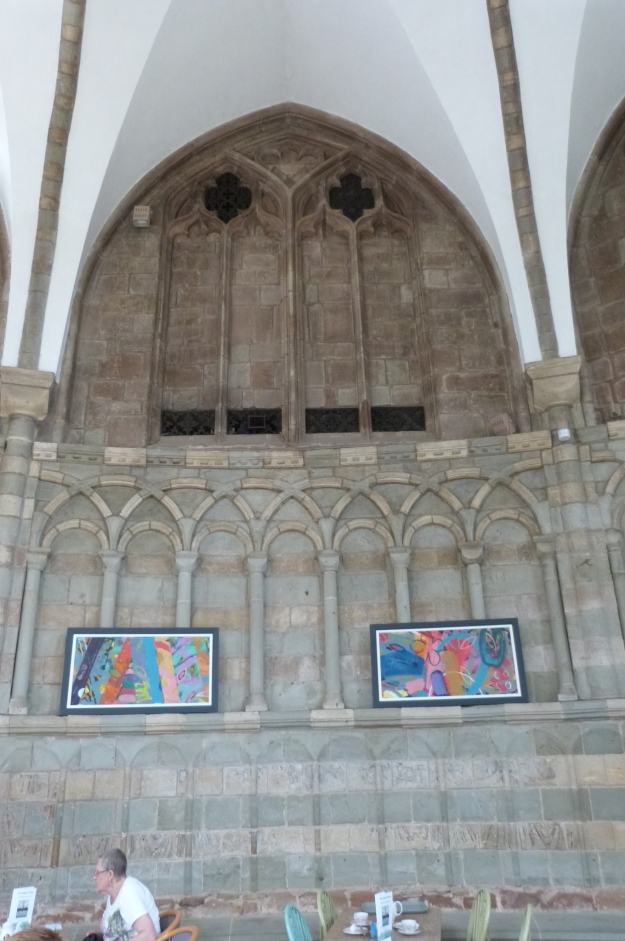 Worcester chapter house is an immensely important monument. It’s the first in a long line of English centrally-planned chapter houses. The walls retain traces of painting, and the stone vault once contained a complicated sequence of Biblical scenes showing the typology of the New Testament foreshadowed in the Old. These are gone now, so when they put the café in there, they thought the best way to make up for this massive loss to English art it was by putting some paintings up on the dado that they look came for free with the frames from Wilkinsons.

I’m surprised this thing survived one night without the cleaners chucking it out. It looks like it’s made out of giant pipe-cleaners. Glitter and Pritt-Stick also involved. Really all it needs is some dried pasta, paper plates and split-pins to really finish it off.

Now, actually, this one is by a proper artist, John Piper, who I actually really like. He’s one of the few artists who can capture the gritty drama of a parish church rather than just making it look like something out of The Darling Buds of May. But not everything in his name is brilliant. His south aisle windows in St Margaret, Westminster, are some of the few in England that can give abstract continental glass a run for its money in sheer grimness. This thing too, I don’t like. It’s trying to hard to be modern and groovy. If it was commissioned for Whitbury New Town Leisure centre, it’d be fine. Worse thing is though, is what it replaced. 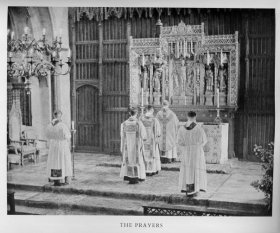 A fine altarpiece by Somers Clarke, which had been, shockingly kept into the triforium gallery for half a century until it was finally brought back downstairs only last year apparently.  If you’re going to get rid of art you find old and outdated, you best be sure you are conjuring up something REALLY inspired. Like when Michaelangelo got the go-ahead to destroy some Perugino frescoes for The Last Judgement in the Sistine Chapel. Which this is not. The Last Judgement is still unequalled in its terribilità. The Chichester tapestry has been equalled by a Fruitopia bottle. 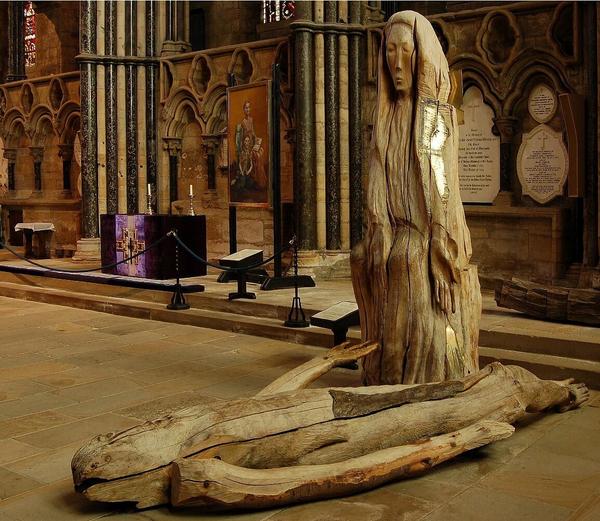 There’s loads of weird stuff in Durham. Of course I don’t have any of my own photographs of any of it because I’m not going to be risk being told off by a custodian for the sake of one of these. I found this one on Google images though. Just look at it. It looks like Gumby’s fallen over and a house ornament from seconds at TK Maxx doesn’t look very interested in helping him up.

Basically everything from Westminster Abbey

Regular viewers will remember I don’t like Westminster Abbey much. This of course it is famously filled to the brim with rubbish that distracts from the architecture. Pearson’s mutilation of the north front, Scott’s ugly choir screen, the overbearing reredos, that out-of-place goldback altarpiece on the south side of the sanctuary (seems to have gone now), loads of Hugh Easton glass, the banners in the Lady Chapel which obscure the architecture, Blore the bore’s choir-stalls (makes for a great rhyme though)…

But worst of all are all the soapy bloody eighteenth-century monuments of admirals ascending into Heaven or a viscount knocking over a pyramid or some lady crying over a pillar that’s fallen down. There was actually a plan in the nineteenth century to build a Westminster “camposanto” for all these and give them the heave-ho from the medieval abbey church. It fell through, of course. Someone needs to treat Westminster Abbey like an elderly parent who’s been hoarding things around their house in plastic bags on the floor, kindly sit them down and say “Mother, we need sort this out”, then hire a skip and get the lot in there. 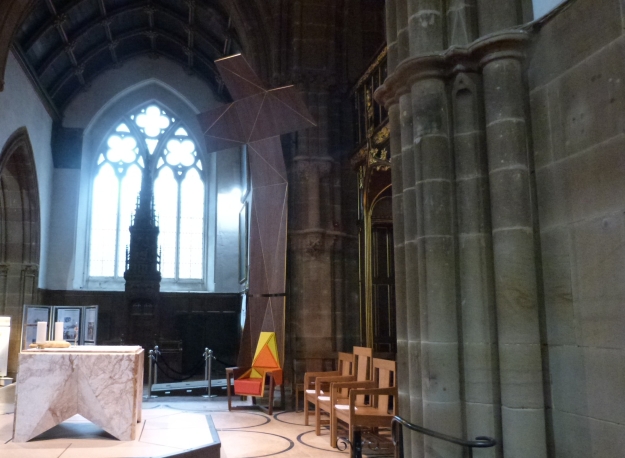 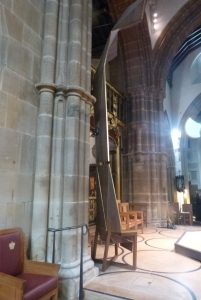 Oh dear. After the excitement of exhuming Richard III and reordering the whole place as a tourist trap, uh, pilgrimage site, Leicester went a bit overboard and decided to redo the liturgical furniture in the crossing. Even though they had a fine carved Neo-Gothic Bishop’s Throne already (in the background there), they decided they needed to replace it with something a bit more “down wit’ the kids”. So they got this thing that looks like the least exciting Transformer ever, made out of MDF (Magnet-tron: ha ha!). As well as looking naffer than a branch of C&A, it also has the disturbing effect of looking like it’s suddenly going to collapse in on itself, crushing any occupant into a perfect cube.

I didn’t really believe this thing was real so I went round the back to try and process it. Then I saw it was attached to the crossing pier, so it’s not going anywhere soon, folks.

The apse clerestory in the Abbey of St Denis, Paris

I could probably dedicate a whole post to terrible glass in continental cathedrals, but it would probably be so tedious that it would only be worth reading if you got stoned and pretended it was a lava lamp. Anyway, the stuff at St Denis, really takes the cake. All you want to do is deliver Abbot’s Suger’s ecstatic speech about “delight in the beauty of the house of God” but the apse is full of gaudy crap. Worst of all is this terrible pictorial one of Napoleon of all things.

Both sides of the west front of Liverpool Cathedral 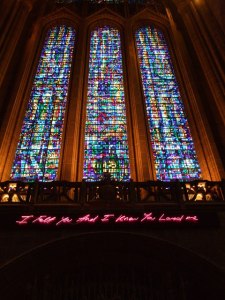 I love Liverpool Anglican Cathedral. It’s the last gasp of the Gothic Revival. It is truly sublime. It’s almost that the space inside surpasses the mass of the object in its sheer volume. I recommend any medieval cathedral enthusiast visit: it might be a white elephant, but it’s a miracle it was finished, and it’s incredibly moving. However, the problem is that this green thing greets you on your way in. It’s supposed to be the Risen Christ, but it’s hardly Piero della Francesca: it’s more the sort of thing you make out of blu-tack in a boring meeting then crush when the coffee trolley comes in. And then you have some sentimental bit of tripe by Tracey Emin on the counterfacade, that I thought was temporary but it never seems to go away. I’m getting tired now, so time to wind it up. This list isn’t in any particular order, except for comedy potential, and of course I’m going to end on the worst. And most of you won’t be surprised by my top choice.

So, yes. Ely Lady Chapel’s foundation stone was laid on the Feast of the Annunciation in 1321, but since the crossing tower of the cathedral collapsed the following February, it’s unlikely much was done except the site dug and some bits of the raft laid out. The building was resumed in the late 1330s, and perhaps benefited all the more for it, as this was really the apex for English sculpture. And the plan for Ely Lady Chapel was to have it in spades. The “nodding-ogees” of the wall arcades are vivaciously organic to the point of eroticism. Indeed, since the vescias contain statues of the royal ancestors of Christ, one might wish to hazard that it’s supposed to be quite that suggestive: Honi soit qui mal y pense and all that. It’s an incredible work of art, quite simply a masterpiece of Gothic. With its full sculpture, altars and stained glass, it must have been ravishing. Makes things like Giotto’s Arena Chapel seem like they done on a budget.

It is of course, hacked about. The narratives of Mary’s early life and her divine intercessions have been pedantically decapitated by a Reformation busybody, and the whole east wall with the culmination of the devotion to the Mother of God has of course been utterly wrecked. It was, until the early 20th century, kept as a parish church, and all the later paraphernalia such as pews and wall monuments taken out in the late 1930s. In its stripped, naked vulnerability, it has a uniquely eerie, poignant beauty, showing the preciousness and transcendence of art.

Then of course someone thinks “ooh, it’s just missing something” and ruins it by putting this load of old shite bang right in the sodding middle of it.

I mean, sculpturally it’s pretty poor, I’m never really sure if she’s supposed to be accepting the incarnation of Our Lord through the Holy Spirit, saying “I JUST CLEANED ALL THIS MESS!” or receiving an incoming message from The Big Giant Head.

And there’s also the white-washing, that she looks more like a caucasian Disney Princess than a girl from late-antique Palestine, which wouldn’t be so bad if she was classically recognisable as the classical Virgin Mary. Instead she looks more like the homonymic Queen of Pop circa Ray of Light.

It’s made of Portland Stone, not that you’d know, because it looks like it came from one of these sets:

Right down to the crappy water-based primary colour paints applied all over the porous surface with no shading or highlights. I mean at least he didn’t go over the lines.

Have you some tat in a big church you love to hate? Tell us below in the comments! Or, if you’re a Russian bot, post some alt-right nonsense! Up to you!

30 thoughts on “Bad art in cathedrals” 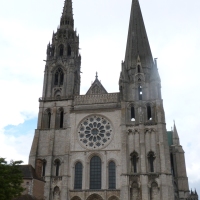