The sad fate of St Jacques d’Abbeville and church preservation

This church, in Abbeville, Picardy, Northern France, is no more. St. Jacques’ tall spaciously glazed apse, its rose windowed transepts, its elegantly flying buttressed nave and its grand west facade with proud tower and crocketed spire has, in the last week, been completely demolished. Despite the extraordinary images, this story has not found its way into the English press, the only English language source interested in it was the often admirably contrary Art Tribune. They have an excellent summary of the church in 2010 and the political situation surrounding it, the last straw that came this February when stones fell from the apse and the subsequent death sentence that came afterwards. Abbeville is now the proud owner of a new level car park. 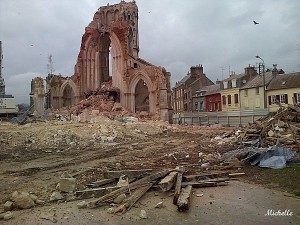 This was the church towards the end of Tuesday. Photos of all this sort of thing can be seen on this blog  that once served to highlight the plight of the church. I can’t deny looking at it obsessively as it comes down. Part of it is the Hollywood spectacle, the other the road-side-car-crash effect, and it’s also quite fascinating to see the structure revealed, the functional buttressing failing, the vault bays collapsing. But ultimately the malice behind the whole thing,  like the Euston Arch, makes it quite upsetting to look at. And that pathetic sight of the stump of the tower with only indications of the great nave it served as the porch to is really the saddest shot of all.

Okay, it’s not a proper medieval church or anything, you could say. It was built in the 1870s by Victor Deleforterie, a follower of Violett-le-Duc, generally espousing his principles of correct, structural, Neo-Gothic. Indeed, ironically enough, it replaced a medieval church deemed structurally unsound. But its qualities were evident to anyone, and it’s hard to dismiss it as cold or pedantic. It certainly does not deserve the atrocious indignity of being smashed down, post-war stained glass, gargoyles and all, by driving diggers into the side of it in the short span of a week. Ten million euros was the (probably inaccurately high) estimate for its restoration that was the main case for getting rid of it. However obvious it is to make the comment that we’ve just spent ten million pounds parading a coffin two miles on the Tuesday morning when the tower of St. Jacques was pushed over by a crane, it’s inevitable that I make it.

I know we can’t keep everything. Our towns and cities are filled with plenty of churches I wouldn’t be too bothered if they went. In fact, maybe a couple should. I can (just about) see two of these sorts of things out the window of my current student flat. Both are non-conformist (neither Church of England or Roman Catholic) buildings of unremarkable ragstone Dec type, like you see all over London. The best you could say about them is that they look like churches. 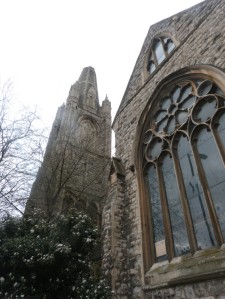 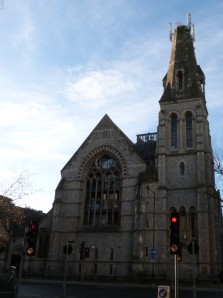 They are the Camden Road New Church, built 1873 for the New Swedenborgians, deconsecrated in the ’50s and since the ’70s, along with its rather nice Edwardian Arts and Crafts church hall, occupied by the Islington Arts Factory, and the Presbyterian church on Camden Park Road, 1876-9, which has been professionally subdivided into flats and offices. Subdivision for secular use is really the end of the church interior, and very difficult to undo. The only rationale for doing this sort of conversion is that it preserves the exterior as a picturesque folly. But both of these churches have suffered the ultimate indignity of being emasculated – their spires capped in the ’80s when health and safety decided they were unsafe. The Presbyterian church has suffered the further insult of having mobile phone aerials attached to it. The outside of the former Swedenborgian church is a bit of a mess, west gable graffiti’d, windows boarded up, glass broken, and from the south side, little sign the building is occupied at all. Both now neither have their original aesthetic effect as a proud house of prayer of a denominational congregation or the Romantic allure of the ruin, they are just look like depressing has-beens. Although they have found alternative uses, their retention as pieces of architecure is counter-productive for the local built environment.

But what happened at Abbeville shows a wholly different attitude. While here we pickle unremarkable buildings in a sorry state with a misplaced feeling of duty for our heritage, this town in France has blatantly ignored a building to the point where they can claim it is structurally unsafe and knock it down. This could never happen here, right? 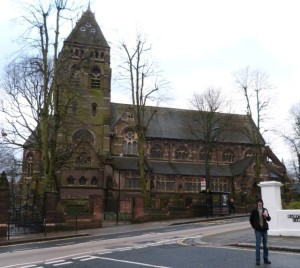 Well, it almost happened with the absolutely magnificent church of St Stephen, Rossyln Hill. If you’ve ever taken a walk along the lower fields of Hampstead Heath, you will have seen this quite remarkable elephantine structure swelling up from the west. It was built 1869-73 by S. S. Teulon, one of those so-called “loveable rogues” of the Gothic Revival who strove to find new avenues within the grammar of Gothic. The problem with Teulon’s churches is, while always quite exciting, that they fell between two stools. While they are often wonderfully ornate inside, they generally were built for congregations of rather low churchmanship. Their planning and design were just the sort of thing that had church-reviewers for the magazine The Ecclesiologist leaving the building with a bunch of angry notes, shaking their heads at how much he’d got wrong. While no doubt the original congregations adored their beautiful buildings in which they could gather for distinctly non-Catholic worship, later generations found the high-Victorian excess intolerable, unlike High Church ritualists. The other problem is that Pevsner was not an admirer of Teulon or indeed many of the Rogueish Goths. While Pevsner’s acerbic little asides are always entertaining, I don’t think he would have appreciated them being used as the main case for getting rid of buildings. St Stephen’s was declared redundant in 1977. The church was boarded up, and in this time it was occupied by squatters, who filled it knee deep with rubbish and the sculptures in the chancel literally defaced in a bizarre revival of iconoclasm. The nave windows were seemingly systematically and covertly stolen from underneath the boards, the rest vandalised. Being grade I listed, demolition was out of the question. It was left to rot. It was not until 2002 that this unloved building was handed over to an independent group, deconsecrated, and restored for secular use. Although all the furnishings have gone, the restoration allows us once again to experience this inspiring space. 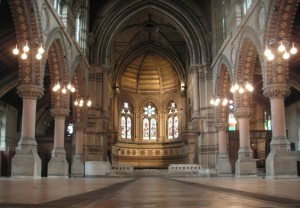 The St Stephen’s Trust (who hold regular open days on alternate Sunday afternoons) have done quite remarkable things, even having missing panels of the Clayton and Bell east windows replaced with replicas of the finest quality to the original designs. But their efforts should not have been necessary. The biggest crime was the neglecting of the building in the first place. It’s a strange thing that there is a certain moral dimension to vandalism. It is only if a building looks unused that some people generally are inclined throw bricks through the windows. It was by ignoring the building that London Diocese nearly condemned it to the fate of St. Jacques.

Willful neglect is a weapon that can defeat listing, and it did not save Christ Church, Sumner Road in Croydon, another Teulon church. It was a fairly early work of 1852 by the architect, certainly not the masterpiece at Hampstead but still had interesting signs of his trademark style. No doubt the twentieth-century disgust of Victoriana was the same here, the building was declared unsafe and closed in 1979. Just as demolition was ordered, the building was listed in 1983, making its fate uncertain. It hung around until 1985 when it caught fire and the whole east end of the church destroyed. Rather suspicious, isn’t it? Regardless, in 1991 the church had a new east end built, and the old west end retained. Of course, I didn’t know all this, as I approached it the other Sunday with my 1983 London: South Pevsner in hand, so the utilitarian brick east end,  was a bit of a surprise. I’m not adverse to modern churches, but the roof in particular here  is rather claustrophobia-inducing in its oppressiveness. 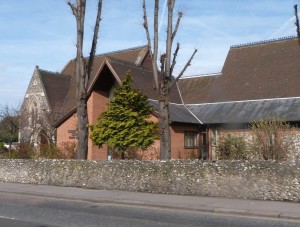 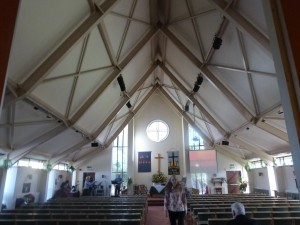 When I had worked out what had went on, “When did you have your fire?” I resigningly enquired to the lady handing out books for the service, who was only too pleased for me to have a look inside. “Oh… that was before my time”, she said. “Oh, umm, well, sorry about your church” was the most I could muster. There’s no way of putting it except that she frankly did not care in the slightest.

There was no malice in the disregard the Christ Church Croydon worshippers had towards the building they no longer had. But sadly it is this indifference to beauty and heritage that ultimately leads to destruction.  An ignorance towards the great efforts of the past to build up places that aspired to beauty in making a space for communal worship is certainly one of the factors that led to the otherwise unbelievable situation of the barbaric demolition at Abbeville in the past week. 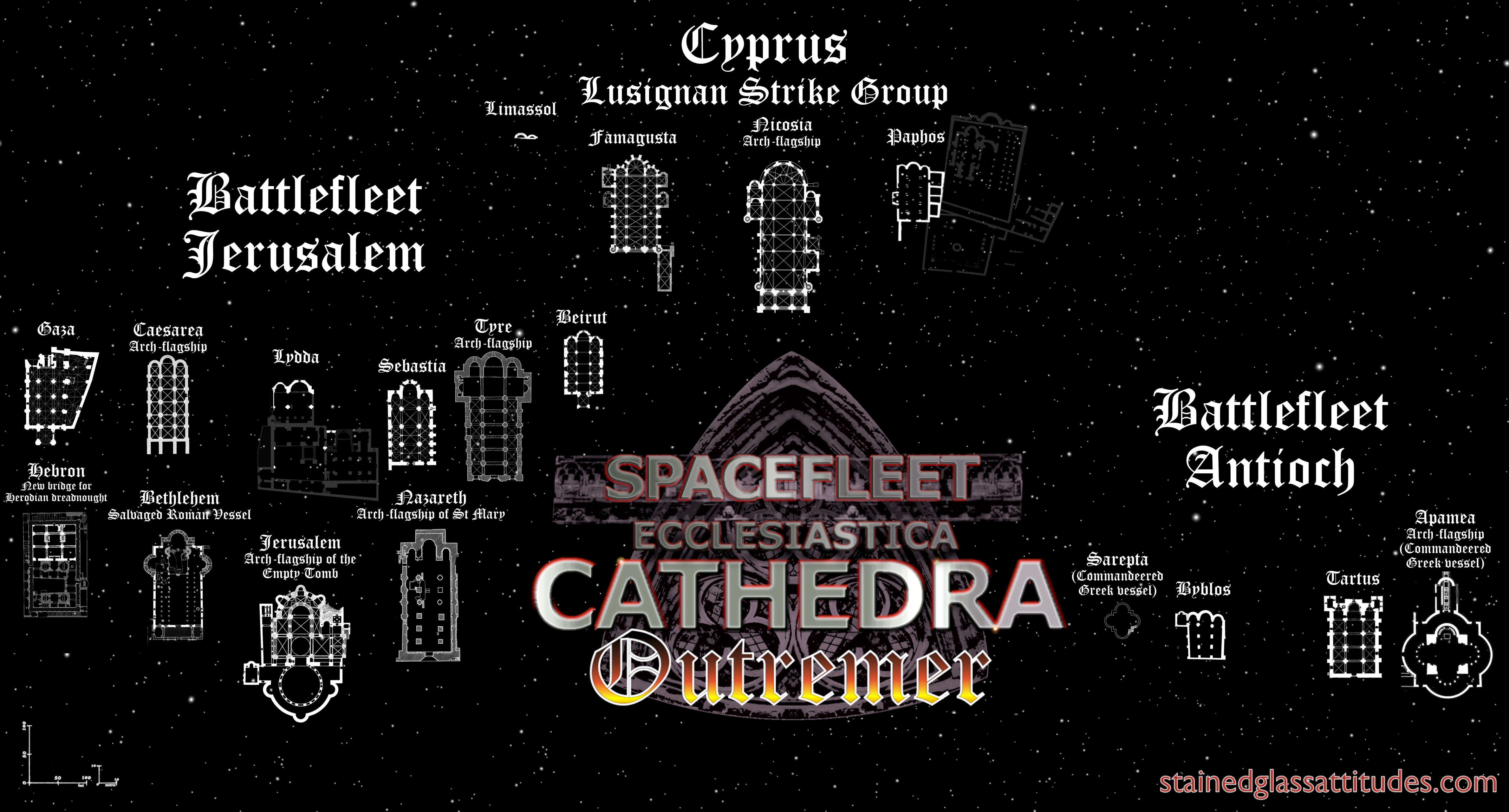 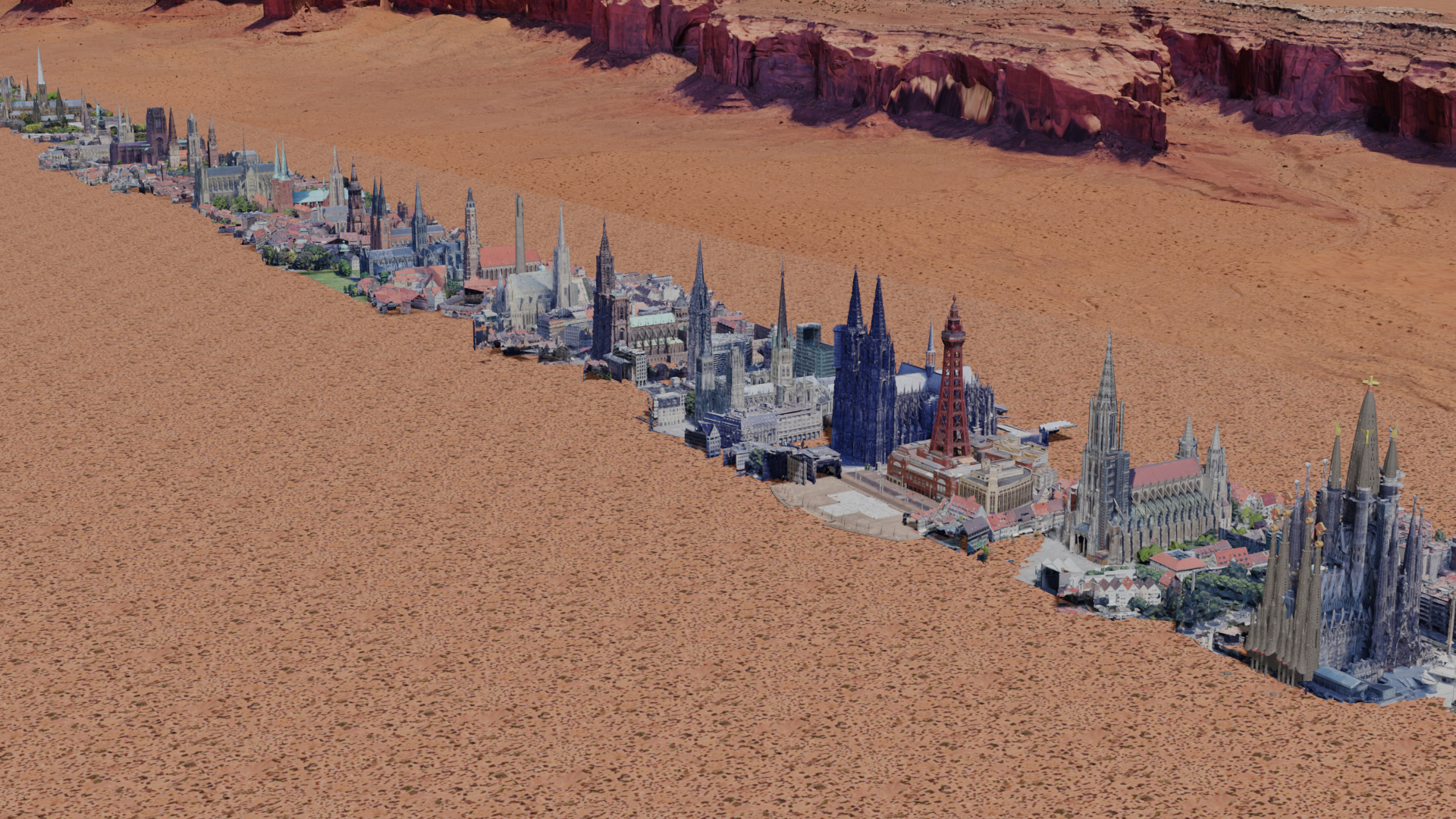 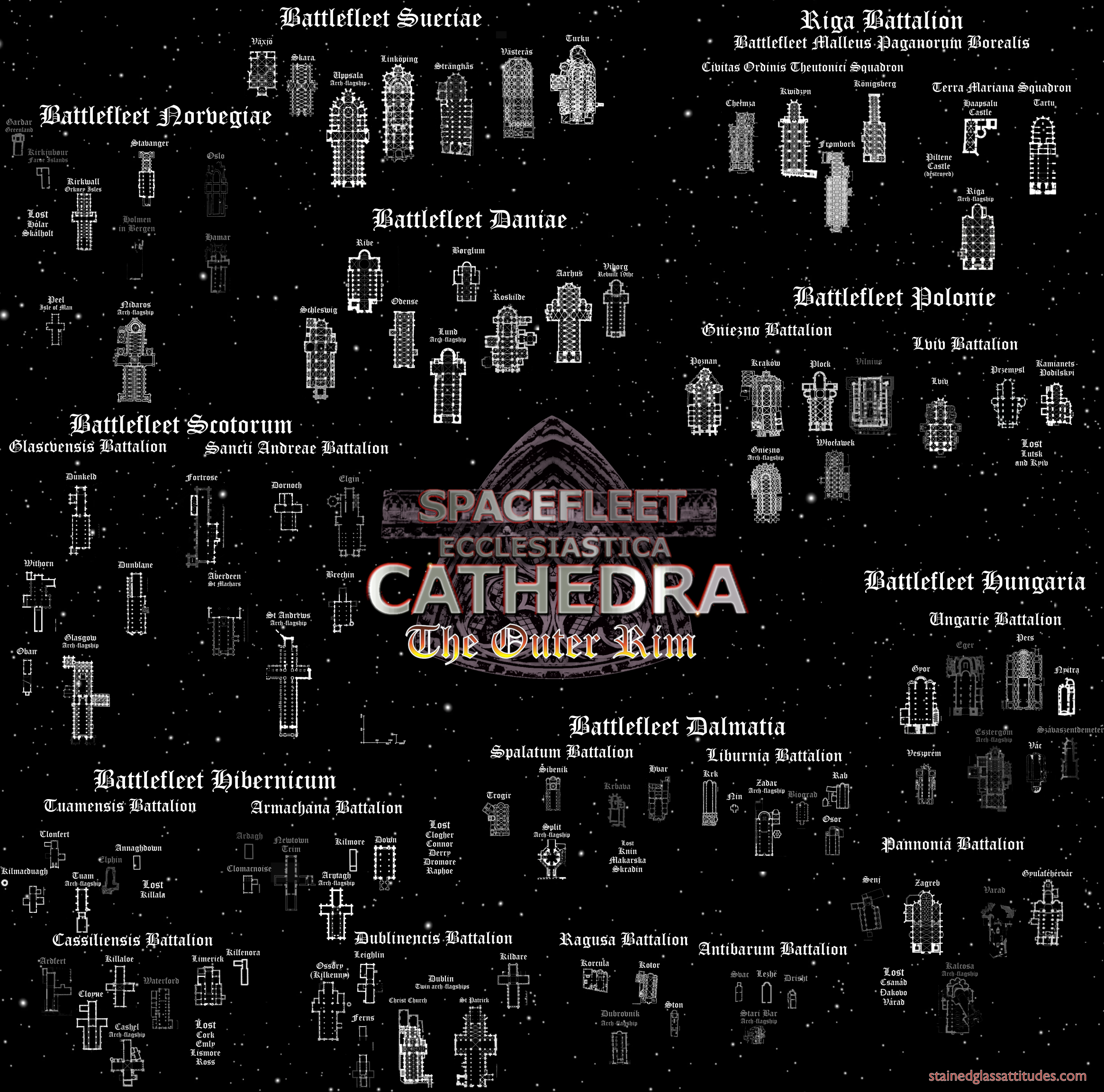 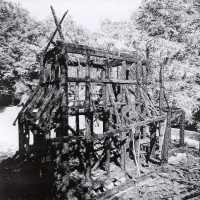 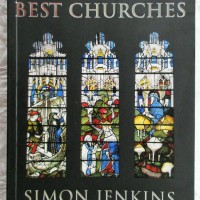 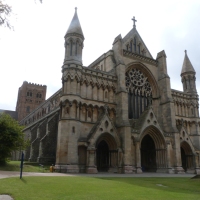 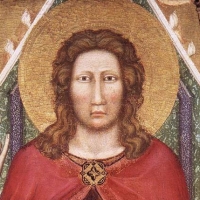